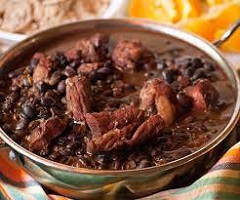 Each country has its own national dish; Yorkshire pudding in the United Kingdom, kimchi in South Korea, wienerschnitzel in Austria, Tom Yum (one of the few) in Thailand, jollof rice in Nigeria, and many more countries have their own unique national food.

The national dish to try in Brazil is feijoada. pronunciation (fey-jwah-duh). The word feijoada comes from the Portuguese word feijo, which means “beans.”

“How is feijoada made? What is it made of?

Feijoada is a black bean stew made with salted and smoked pork and beef products such as carne-seca and smoked hog spareribs.

The meal is as warm, inviting, filling, and vibrant as Brazil’s music, people, and culture.

According to some historians, feijoada is a dish invented by African slaves. The s ‘laves would gather up the leftovers from the plantation masters’ feasts and combine them with black beans to make a new stew.

Farofa (fried cassava flour with bacon) and orange slices were offered with this new dish.

Feijoada is customarily made from a variety of pig parts, including the ears, tail, tongue, hocks, and feet.

Here are some recommended substitutions:

When Should You Eat Feijoada?

Feijoada is traditionally served on Wednesdays and Saturdays when restaurants serve it and homes cook it for social occasions.

It is a low-cost dish that is enjoyed by people of all social classes.

Feijoada is a low-cost dish that is enjoyed by people of all social classes.

Making this Brazilian delicacy is not difficult, but it does require some planning because the salty meats and beans must be soaked first.

I’ve included directions for cooking on the stovetop.

The dish is a labor of love that takes patience and a bit of tender loving care. A great recipe is a fantastic foundation for creating the meal at home.

Step 1: First, in a large heavy-bottomed saucepan with a tight-fitting cover, heat the bacon until crisp. Then, remove the oil from the pan and set it aside. After that, sear the ribs, sausages, and pork shoulder in batches. Then, season with salt and pepper to taste in each batch.

Secondly, remove the meat from the pan and set it aside. Then, put in the garlic, onion, and chili. If need be, add a bit of extra olive oil. Meanwhile, season with salt and pepper and cook for 8 minutes, or until the potatoes are tender.

Now, fill it with just enough water to cover it (about 650ml). Bring to a boil and then lower to low heat.

Then, cook for 2 hours, or until the beans are mushy and the meat is cooked through. Remove the lid in the last hour if there is too much liquid in the pot.

Finally, you may alternatively use a slow cooker on the short method (4 hours) or a pressure cooker in batches of 30 minutes each to produce a rapid version.

It goes well with

Serve with rice, parsley or coriander, spicy pepper sauce, and orange slices on the side. 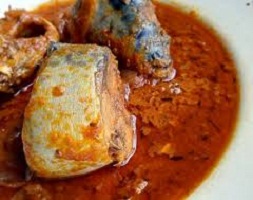 Mackerel and Tomato Sauce Recipe – A Quick Stew for Rice 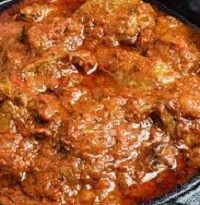 How to Make Nigerian Beef Sauce Recipe at Home 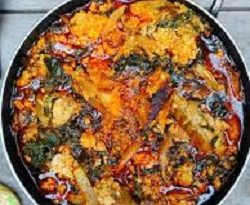