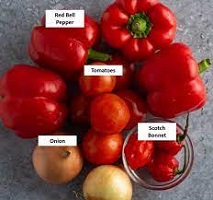 A lot of Nigerian recipes, in addition to recipes from other parts of West Africa, start with pepper mix.

It’s a lifesaver to have it in the fridge or freezer. It makes it simple to cook meals in a shorter amount of time.

In the South-Western section of Nigeria, blended pepper mix spice is the mainstay of cookery, and every two or three streets apart, a pepper milling machine operator blends the pepper mix for a living.

Pepper mixture/ata lilo is used in almost Nigerian cuisine, and it can come in any variety or, texture.

It’s also interesting to note that when “Nigerians ask you if there’s pepper in the dish,” they’re not referring to black or white pepper.

In Nigeria, the answer to that question is a combination of scotch bonnet chili or bird’s eye chilli (or any spicy pepper), paprika, red bell pepper (tatashe), and maybe tomatoes.

What Is Nigerian Pepper Mix?

It’s a red pureed combination of tomatoes, red bell peppers (tatashe in Yoruba), onions, and hot peppers also referred to as Ata Rodo (name in Yoruba) and Scotch Bonnet Peppers (name in English) that is blended and cooked to reduce moisture and either stored for immediate or later use.

It goes by a variety of names. Nigerian stew base, pepper mix, or blend are some of the terms used to describe it.

Nigerian Pepper Ingredients – What is pepper mix made of?

You’ll need the following ingredients depending on the type of pepper mix you’re producing.

Recipe – How to Make Pepper Mix

If you’re using a blender or pepper mixer at home remove the scotch bonnets and bell pepper seeds.

Then, wash the peppers and tomatoes thoroughly. Onions should be peeled.

Leave the seeds if you have a powerful blender or access to a mechanical grinder.

All of the ingredients should be chopped up. Blend with a little water until you get a smooth purée.

Making a large quantity and storing it in the fridge or freezer will save you time.

Instead of blending then boiling the pepper, you can boil the pepper raw, then blend. Either way, it’s all good.

It’s a good idea to boil the puree while you’re doing this because it’ll save you time when you need it later.

It also aids in the reduction of water content, which saves storage space and extends the life of the product.

Jollof Rice is a West African rice meal that combines fiery chili peppers, tomatoes, African curry powder, and a variety of herbs and spices to create fluffy, spicy rice that is suitable for any occasion.

Pepper Stew, also known as Obe Ata Din Din in Yoruba, is a Nigerian stew made entirely with peppers. It is red, like Tomato Stew, but extremely hot!

You Can Use Pepper Blend for the Recipes below and More

What is the best way to store?

This dish can be prepared ahead of time and stored in the freezer for up to six months.

Allow the purée to cool completely before scooping into portioned plastic containers or freezer bags and freezing.

Use all of the servings once they’ve been opened, or place any leftovers in the refrigerator. 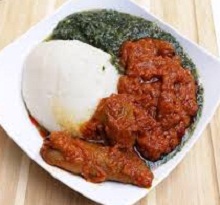 Tuo Zaafi: How to Make the Best Tuo Zaafi from Scratch 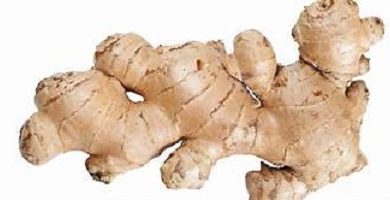