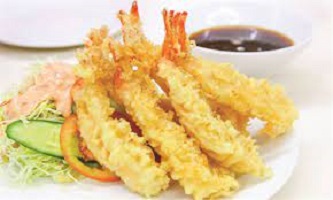 Shrimp tempura Recipe: How to Make with Step By Step Guide

Tempura is a well-known and popular Japanese dish that is enjoyed all over the world.

You’ll probably see Shrimp Tempura (海老の天ぷら) and Vegetable Tempura at your local Japanese restaurant, but the Japanese make tempura out of a variety of fresh ingredients.

It is also served over a rice bowl (Tendon) or noodle soup, in addition to being a stand-alone dish (Tempura Soba or Tempura Udon).

In addition to vegetables, seafood is frequently used in tempura. Shrimp is, without a doubt, the most popular type of seafood.

What is Shrimp Tempura?

Shrimp tempura is simply raw shrimp dipped into tempura batter and then, deep-fried in hot oil.

The batter that is utilized to make the tempura comprises flour, water, cornstarch, and sometimes eggs.

We’re using a tempura mix in this recipe to make it quick and easy to make whenever you have a craving.

The delicately fried batter shell that surrounds these shrimp has the most delightful crunch.

You’re going to love this delectable Asian delicacy! Fried fish tacos are a must-try for anyone who enjoys crunchy seafood.

Homemade Shrimp Tempura that is crispy and delicious! The batter and deep-frying technique is the key to achieving a light, crisp coating that does not absorb oil when fried.

The method of preparation is called Hanaage (花揚げ); hana means flower and age which means deep-frying.

When you drop tempura batter into hot oil, it blooms like a flower.

Because Hanaage-style Tempura is time-consuming and difficult to prepare, the majority of Japanese home cooks avoid it.

It’s much easier to simply batter the shrimp and deep fry them.

Here are some pointers on how to make tempura:

These simple steps will teach you how to make the BEST Crunchy Shrimp Tempura. This light and crispy shrimp dish work well as an appetizer or main course.

How to make this Shrimp Tempura recipe

• Firstly, peel and cut the shrimp. Make shallow slits in each shrimp’s inner part. For each shrimp, I usually make 5 slits.

The shrimp will not curl during the frying process if they are separated in this manner. This is also known as “stretching” the shrimp.

• Secondly, combine all of the ingredients in a mixing bowl. In a large mixing bowl, combine the dry tempura mix and cold water. Using a paper towel, pat the shrimp dry before dipping them into the batter.

• Then, dip and fry. In a pot of oil over medium-high heat (about 375 degrees Fahrenheit), fry the battered shrimp until golden brown, about 2-3 minutes.

How long should the shrimp be fried?

Heating the oil to the proper temperature is the best way to fry anything, especially shrimp.

You’ll need a thermometer that reads 375 degrees Fahrenheit. Drop in the battered tempura and fry for about 2-3 minutes once the temperature has reached the desired level.

Tips for the crunchiest Shrimp Tempura

If you don’t have any of those, you can make this shrimp tempura recipe with sunflower, vegetable, canola, or peanut oil.

The shrimp will become soggy if the oil becomes too cool. if it becomes too hot, the batter will brown while the inside remains raw.

How to Store and Reheat

Though this Shrimp Tempura is best eaten right away, any cooled leftovers can be stored in an airtight container in the refrigerator for up to 2 days.

Place it on a baking sheet and reheat it in the oven at 325 degrees Fahrenheit for 5-8 minutes.

This ensures that it warms without becoming soggy and remains crisp. They can also be reheated using an air fryer

What is shrimp tempura made of?

Raw shrimp are dipped in tempura batter and deep-fried in hot oil to make shrimp tempura. The batter for tempura is made up of flour, water, cornstarch, and, on occasion, eggs.

We’re using a tempura mix in this recipe to make it quick and easy to make whenever you have a craving.

What does shrimp tempura mean?

Tempura is a Japanese dish consisting of battered vegetables and shrimp or other seafood fried in deep fat.

What kind of shrimp are used in tempura?

10 large shrimp are required for this recipe. You’ll want to use extra large or jumbo shrimp because shrimp is the main ingredient.

Remove the shrimp’s shells first, but leave the tails on. It not only looks better, but it also makes breading and frying the shrimp much easier.

What’s the difference between tempura shrimp and fried shrimp?

For tempura, shrimp is battered, while for Ebi Fry, it is panko-coated.

How do you get your shrimp to be so straight? It’s all in the trick!

Is tempura a healthier option than fried? Is tempura frying healthier?

On the other hand, tempura is considered healthy if your goal is to lose weight? Because the vegetables in Tempura are deep-fried, it has a high-fat content, making it a high-calorie dish.

Since the vegetables in Tempura are deep-fried, this dish is very high in fat and thus making this a rather high-calorie dish.

Tempura is certainly not considered healthy, but there’s a trick on how to incorporate Tempura into your healthy diet!

In other words, the western obsession with deep-fried everything has made its way into the world of sushi.

The most popular tempura rolls are probably shrimp tempura rolls, but there are also some unique rolls like Tiger Rolls, Crunch Rolls, and Dragon Rolls.

When it comes to tempura and fried foods, what’s the difference?

But it’s the batter that distinguishes tempura from other fried foods. It doesn’t use bread crumbs and uses less oil than other frying techniques.

The batter is made up of three ingredients: beaten egg, flour, and cold water. Occasionally, starch, oil, or spices are added.

When it comes to tempura and batter, what’s the difference?

What’s the Difference Between Tempura Batters and Other Batters?

In general, “tempura” refers to any food that has been dipped in tempura batter and deep-fried using the tempura method. The batter is made up of cold water, flour, and a beaten egg and is used to coat tempura.

What is the taste of tempura shrimp?

Tempura is typically described as a lightly fried version of whatever ingredient is used as a base.

The most popular options are shrimp and prawns, but you’ll also find recipes made with mushrooms, eggplant, and squash, which taste like each of those, respectively.

What is the best way to flatten shrimp for tempura?

Make a few slits on the underside. To make the shrimp straight, hold it in both hands and bend it backward (belly-up).

To achieve the desired shape, straighten the shrimp as much as possible.

How do you make tempura sauce?

How do you keep shrimp tempura from curling?

Cut a few small horizontal slits on the underside of the shrimp to keep them from curling up while cooking.

Before you cook the shrimp, press it flat on your cutting board to straighten it out even more.

Shrimp can also be cut in a butterfly pattern to keep them from curling up.

Are you supposed to eat the tail on tempura shrimp?

Shrimp tails are most commonly eaten when the shrimp is deep fried and the tail is crispy.

Why are tempura prawns so expensive?

One of the reasons, I’m sure, is the use of fresh, high-quality ingredients, which tend to be more expensive.

Another reason is that high-end tempura takes time to prepare, with each piece deep-fried to perfection and served one at a time to avoid getting cold and soggy from sitting out.

Can I eat Shrimp Tempura while pregnant?

Sushi alternatives that are safe to eat while pregnant include vegetarian sushi and sushi rolls made with cooked fish or seafood, such as shrimp tempura.

What is the best oil to use when frying tempura?

For frying tempura, use vegetable oil such as corn, canola, safflower, or peanut oil rather than olive oil.

Sesame oil has a strong aroma, so a couple of tablespoons or more can infuse your tempura with it. The oil can be used several times.

Is the tempura shrimp rolled raw?

Cooks usually trim the tail but do not remove it, and dip each in the batter quickly. After coating all of the shrimp, they are dipped in hot oil and deep fried.

Does shrimp tempura have raw fish?

Because there’s no raw fish, it’s a great way to introduce kids to sushi, and if you keep a box of tempura shrimp in the freezer, you can make sushi whenever the mood strikes.

Is egg used in traditional tempura?

Tempura batters are frequently devoid of eggs. Some recipes only use the yolk, while others use the whole egg for crispier batters.

If you don’t want to use eggs, try this recipe with just flour and cold water.

Tempura Thai Flour is typically made up of a combination of flours such as wheat, rice, and tapioca starch, along with salt, and baking powders (E 450, Sodium bicarbonate E500), and pepper.

MSG is sometimes used as a flavor enhancer. To make your batter, combine all of the ingredients in a mixing bowl with very cold water.

When it comes to tempura, what is the proper way to eat it?

It is suggested that you eat the tempura from the front to the back, as this will allow the flavors to develop more fully.

Is tempura a tasty dish?

Tempura is one of the most popular Japanese foods, owing to the fact that, despite being fried, it has a light and airy flavor.

Tempura is made of seafood and vegetables that are deep-fried after being coated in a flour-based batter. There are, however, other tempura varieties.

What are the different types of tempura?

Tempura is made with both seafood and vegetables and fried in sesame oil until golden brown in the eastern Kanto region of Japan.

How do you make Filipino shrimp tempura?

How do you make Kirkland tempura shrimp? Kirkland is made in a variety of ways.

Then, deep fry for 2½ to 3 minutes. Remove from oil, drain on an absorbent paper towel, allow standing 2 to 3 minutes before serving, and enjoy.

The Shrimp Tempura Roll has the most calories for the reason that the shrimp is breaded and fried, giving the shrimp a crunchy, tasty flavor. 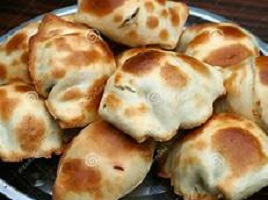 How to Make Traditional Steamed Bread 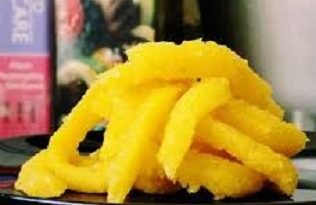 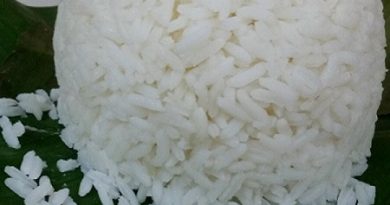 How to Cook Basic White Rice from Scratch